Thousands of people have fled to a beach in Victoria, Australia to escape bushfires racing towards the coast.

Locals in Mallacoota have described a “terrifying experience” of camping on wharves and boarding boats under blood-red skies.

Officials confirmed another two people have been killed by fires in New South Wales (NSW) – there are now 12 deaths linked to the fire crisis.

Authorities say four people are missing in Victoria and another in NSW.

The bodies of the latest victims – believed to be a father and son – were found in the town of Corbargo in NSW, which was hit by a massive blaze on Tuesday.

“Very tragic set of circumstances,” said NSW police deputy commissioner Gary Worboys. “[They were] obviously trying to do their best with the fire as it came through in the early hours of the morning.”

In Mallacoota, the local fire service said a change in wind direction had taken the worst of the fires away from the town.

“I understand there was a public cheer down at the jetty when that was announced,” said chief officer Steve Warrington.

Several holiday spots along the coast have been cut off and the main road in the region – the Princes Highway – has been closed.

Victoria’s state premier Daniel Andrews said navy ships may be called upon to provide food, water and power to the cut-off townships.

‘We were ready to jump into the water’

In Mallacoota, residents fled to the beach or took up shelter in fortified homes when they heard the warning siren go off at 08:00 local time on Tuesday.

“It should have been daylight but it was black like midnight and we could hear the fire roaring,” said David Jeffrey, a local business owner. “We were all terrified for our lives.”

“There’s a rock wall that they’ve built to keep back the sea, and that was where we were going to jump into the water if the radiant heat had hit,” he added. 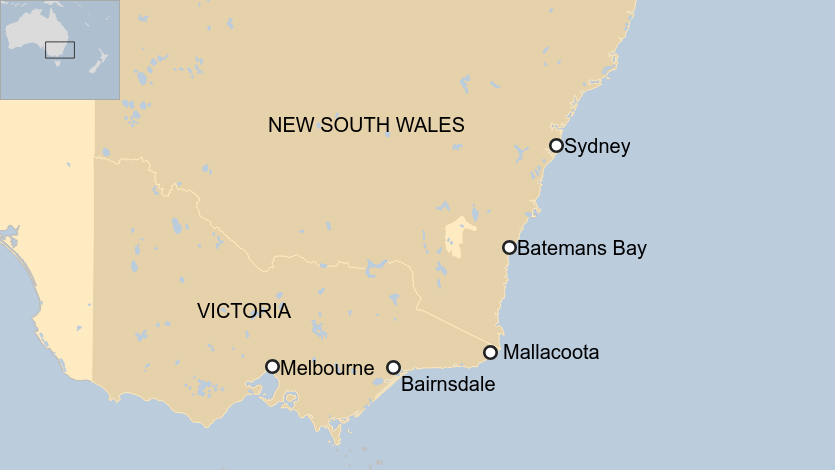 The fire swept through the town destroying numerous buildings, but was kept back from the shore by the change in wind.

Firefighters had gathered at the shore as a last line of defence.

Steve Warrington from the fire service said: “It is pitch-black, it is quite scary… the community right now is under threat but we will hold our line and they will be saved and protected.”

He said there had been “significant property losses” across the entire East Gippsland region in the past days.

Authorities had urged people in the region – many of them tourists – to stay put because by Monday it was too late and dangerous to evacuate.

Residents in the NSW holiday towns of Bermagui and Batemans Bay also fled on Tuesday morning to the waterfront or makeshift evacuation sites near the shore.

Locals told the BBC they had “bunkered in” as the front approached, raining ash on the beaches.

“It was bloody scary. The sky went red, and ash was flying everywhere,” said Zoe Simmons in Batemans Bay.

Hundreds of massive blazes have destroyed millions of hectares in the eastern states of Australia since September.

Samuel McPaul, 28, was a newlywed who was expecting his first child. Powerful winds near the NSW-Victoria border – generated by the fires – lifted his 10-tonne truck off the ground and flipped it over, the service said.

Two other firefighters were also injured and suffered burns.

Temperatures exceeded 40C (104F) in every state and territory at the start of the week, with strong winds and lightning strikes bolstering the flames.

Meteorologists say a climate system in the Indian Ocean, known as the dipole, is the main driver behind the extreme heat in Australia.

But much of Australia is also suffering from a record drought and scientists say climate change has worsened the conditions, making it easier for fires to grow.

For many Australians, the final days of 2019 have been a tense and worrying time. The smoke hanging in the sky day after day is a constant reminder of communities on fire.

Some are staying inside to avoid the thick, acrid smoke, while others are cancelling holidays or taking long detours to avoid roadblocks.

Here in Merimbula, on the New South Wales coast, the sun has been blotted out, casting a deep orange haze in the sky. People on the street are describing it as apocalyptic.

The smoke is now so thick it’s almost impossible to drive. The ground is blanketed in ash and supermarkets are packed with people stocking up with supplies.

Holidaymakers should be swimming and hiking today, but they’re checking into evacuation centres or planning escape routes.

Confirmed cases of COVID-19 in Sri Lanka reached 2,823 as another 08 persons tested positi…